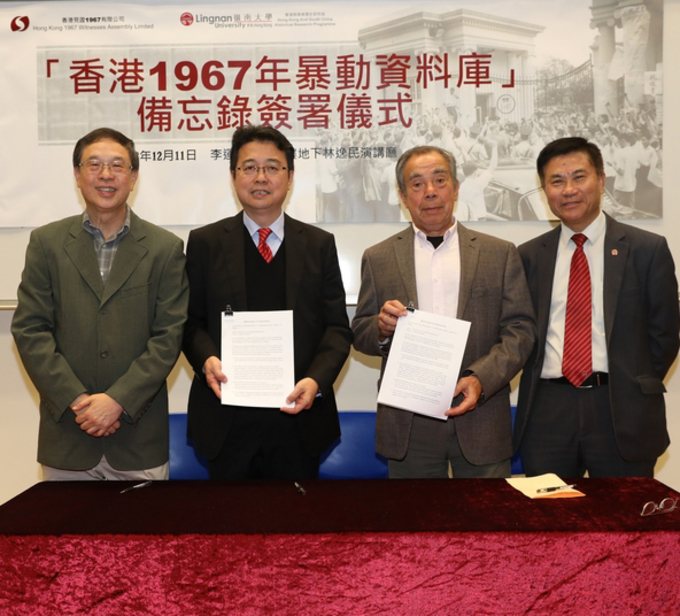 For the preservation and management of relevant information on The Hong Kong 1967 Riots, the Hong Kong 1967 Witnesses Assembly Limited will support Lingnan University in setting up “The Hong Kong 1967 Riots Data Base” as an academic platform to preserve and manage relevant information.  With an aim to help restore the historical picture of the Riots, the database collects, classifies, sorts and systematically stores documents, images, footages and physical objects for access and use by scholars, researchers and the public.  This project is hosted by Lingnan’s Hong Kong and South China Historical Research Programme, and a Memorandum of Understanding was signed on 11 December.

In his remarks at the signing ceremony of the memorandum, President Leonard K CHENG said, “This year marks the 51st Anniversary of the 1967 Riots, which means just over half a century has now elapsed.  Today’s younger generation might not have a clear impression of the ins and outs of what happened; some might have never heard of such an incident in Hong Kong.  However, to the witnesses of the incident, they certainly have not forgotten.”  He continued, “1967 was the most turbulent year for Hong Kong after the Second World War.  It was also in this difficult and challenging year that Lingnan University re-established itself in Hong Kong.  The Riots not only brought immediate impact to the Hong Kong society at that time, but also influenced the development of a whole generation of people.”  On behalf of Lingnan University, President Cheng thanked the Hong Kong 1967 Witnesses Assembly Limited for funding the University to establish the database, which has laid a solid foundation for Lingnan to develop an academic platform for researching into the Riots.  He wished the project a smooth launch and every success.

The Hong Kong 1967 Witnesses Assembly Limited’s Chairman and Co-founder Mr James A ELMS, along with the other Co-founder Mr YEUNG Yu-Kit, signed a Memorandum of Understanding with Prof LAU Chi-Pang, Professor of Department of History and Co-ordinator of Hong Kong and South China Historical Research Programme at Lingnan, under the witness of President Cheng.

The database will be built on digital format hosted on the website of the Library at Lingnan University for public access and use.  The project will last for three years and is scheduled to launch in January 2019.  It is expected to be open for public use in the first quarter of 2021.