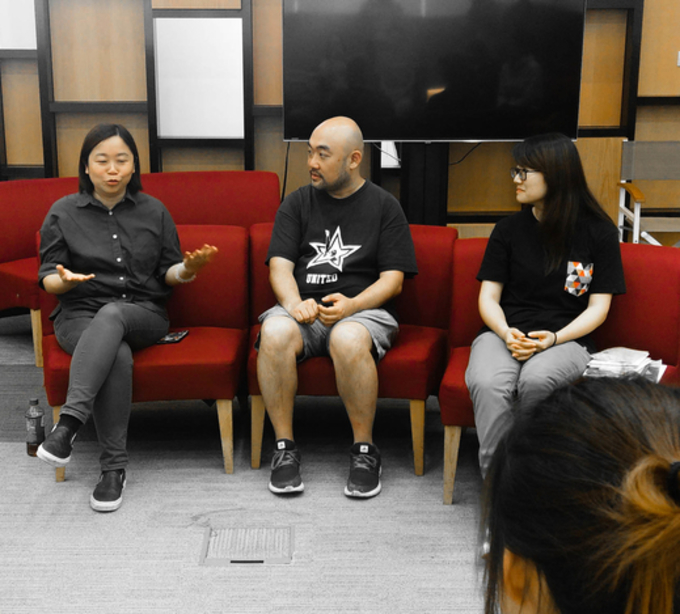 The concept of a “human book”, essentially someone who is happy to sit down with a group of listeners to tell stories or share advice and experience, is catching on fast in Hong Kong.

And on April 24, the Fong Sum Wood Library at Lingnan University was able to borrow two such “books” from Human Library Hong Kong to inform and inspire students.

One was a veteran production director for television programmes, the other a passionate promoter of local agriculture. And both made a big impression in outlining their career paths, guiding principles, and some of the challenges they have faced.

“After graduation, I took my first steps in the video industry as a production assistant with a television station,” said Pan, who has been working in the television and film industries for more than 10 years. “Later, I got involved in administration and advertising as well, and now I’m a freelancer working on documentaries.”

She traced his initial interest in television back to the children’s programme 430 Space Shuttle, which she watched as a youngster at a time when there was no YouTube or mobile apps.

“That show gave me a sense of fantasy and gradually shaped my thoughts about going into the TV industry,” said Pan, who subsequently made her mark as part of the team producing children’s programmes.

Evolution in the television industry

Times have changed, she noted, and children’s programmes are no longer just about entertainment or getting a laugh. They are also expected to promote educational values.

“Today, parents aren’t sure about letting their kids spend time watching a programme where cartoon characters just sing, dance and have fun,” Pan said, “But I used to watch the Children’s Song Awards Presentation in the past. And I remember simple things like that as moments of happiness when I was growing up.”

In general, she noted that Hong Kong is exposed to ideas and influences from different parts of the world, so it should be no surprise that audiences here expect high-quality television programmes. Moreover, the local media excels in producing informative documentaries which often reveal extraordinary stories or unexpected perspectives and mindsets.

“The Hong Kong audience expects television programmes to provide entertainment, but they also want channels which help them acquire knowledge and get a better grasp of truth and reality,” Pan said.

In search of options

In her talk, she didn’t disguise the fact that most productions are all about money, and that is the key to programme quality. However, no one going into the industry on the production side should expect to “coin it in”. That shouldn’t stop them pursuing their dreams, though, or realising their creative ambitions.

Pan is now immersed in making documentaries on a range of subjects, including music and elderly care.

“Staying focused is, of course, a prerequisite for success, but one should also try to explore other interests at the same time,” she said. “Then, if trends and attitudes change, you still possess other strengths and areas to move on to.”

Pan regarded herself as now enjoying a second life, or career. She also expressed the view that technology is simply a tool and what truly matters is the human mind.

“Entertainment is vital for human beings. I also believe that any media platform may eventually ‘die’, but the video content itself continues to last.”

The second “human book” taking part in the event was Nicole. She runs Tin Yeah, a retail shop selling locally grown agricultural products. In the past 18 months, it has helped to connect consumers and local farmers via its joint purchase programme, thereby living up to the goals of the Community Supported Agriculture initiative. The business also arranges weekly packs of organic vegetables for some 50 households as another way of spreading the word about the benefits of local agriculture.

“The harvest of seasonal fruit and vegetables is determined by the climate,” Nicole said. “Last year, for instance, we had extreme weather conditions. There was April’s drought, which brought insufficient rainwater to irrigate the farmland, then severe floods in June and July, and September’s super typhoon Mangkhut. Each weather event devastated the growing plants, and there were times when we had no choice but to put a halt to making up packs of vegetables.”

Apart from selling produce, the retail shop also hopes to increase understanding of the realities farmers face and awareness of how hard it can be to earn a living from the land.

“We support organic farming that reduces the use of chemical nutrients. There are natural ways to make farmland healthier and reduce insect pests. As a result of that, farmers can achieve better yields and earn more.”

To reinforce that message, Nicole makes a point of “educating” customers about what they are buying. She is always ready to talk about the various types of fruit and vegetables, where they are grown, responsible farming practices, and the reasons why some produce look different from what is found in a supermarket.

She also told a story about collaborating with a traditional manufacturer, which was another chance to promote local agriculture.

“There is a 70-year-old noodle factory in Wanchai, which adheres to the principle of ‘original taste’,” she said. “They insist on using only natural ingredients to make the doughs for different types of noodles and don’t use any artificial colouring.”

Aware of this, Tin Yeah saw a chance to collaborate by becoming a supplier of organic agricultural produce grown locally.

“The factory owner agreed at once and his team then came up with a new range of noodles flavoured with tomato, turmeric and pumpkin we had supplied,” Nicole said. That experience also showed that if the older generation is willing to take action to promote local agriculture, there is no reason for the younger generation to drag their feet.

On a separate topic, she noted that her own income might not reach the level of salary sometimes offered to fresh graduates. However, she felt that being true yourself is what matters most in life and that job satisfaction and working with people you respect is more important in the long run than how much you earn.

Established in 2011, Human Library Hong Kong is currently the only associate branch here of the pioneering Human Library Organization. According to its local leader PONG Yat-Ming, the human library is a global campaign which originated in Denmark to advocate equality in education and minimise misunderstandings and prejudices in society.