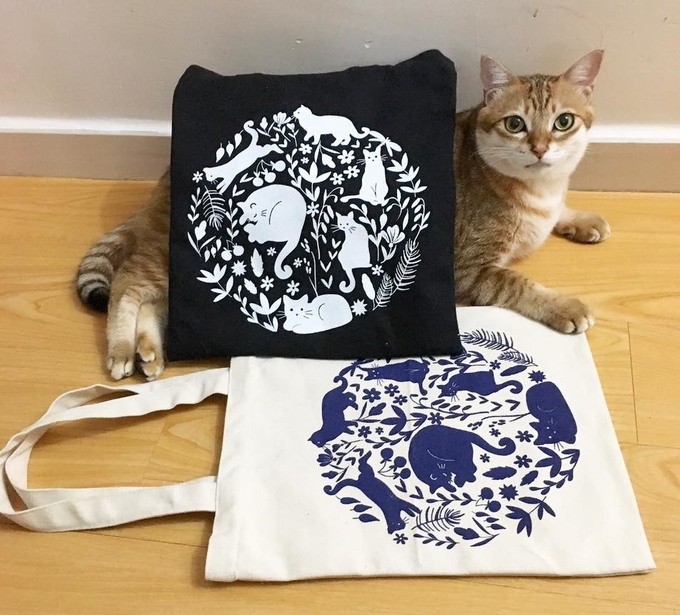 For many staff members, students and alumni of the University, Lingnan Cats, the beloved residents of the Lingnan campus, are part of their university life and an inalienable imprint in their memories. Human beings and cats live together harmoniously in this inclusive community.

Helen Hui, a co-founder of Lingnan Cats Concern Group and Lee Mei-ting, a co-founder of Fu Tei Book Store, who have just graduated from the University, said the idea of “Lingnan Cats Lucky Bag Campaign” originated from their love for Lingnan Cats and care for the community. “We are both cat lovers, and we also want to contribute to the community. In one casual chat, I learned that the Lingnan Cats Concern Group needs money to provide food, desexing and health care for Lingnan Cats. At that time I was planning with other students to open a book store in Lingnan, so we came up with the idea of launching the Lucky Bag Campaign to raise fund for the two organisations”, Mei-ting said.

Starting from mid-October, the “Lingnan Cats Lucky Bag Campaign” has been selling a series of souvenirs including lucky bags, socks, postcards, towels, badges, cello tapes, stickers and two newsletters with the theme of Lingnan Cats designed by a Lingnan student and an alumnae. Incomes received, after deducting costs, will be used solely to support Lingnan Cats Concern Group’s expenses in taking care of Lingnan Cats, and operation of the Fu Tei Book Store.

According to Helen, now there are 40 to 50 cats living on campus, and they are mainly taken care of by the Lingnan Cats Concern Group and other volunteers. “We all want to do something for the community. Lingnan Cats are part of our community, and apart from our love for cats, we hope to put into practice our talents for the community.  Hence the Campaign, whether it’s the theme, design or designer background, is centred around the Lingnan community.” Helen pointed out that the idea of launching the Campaign is to provide rooms for participants, no matter they contribute money or efforts, to bring themselves into full play. Students and alumni who organise the Campaign exercise their creativity and invest their time and energy, and those who buy the Lucky Bags are supporting the community with action,” said Helen.

“Apart from trading new books and second-hand books donated by Lingnan’s teachers, students, alumni and other people, an ‘All You Can Read’ corner will be set up where a variety of magazines will be available for free reading by students. The Book Store will also organise different kinds of cultural activities such as talks, workshops and book-reading clubs regularly, and an area for showcasing Lingnan’s history, as well as books and other exhibits related to the University is being planned.” Mei-ting also hopes that the Book Store can provide job opportunities for Lingnan students, allowing them to learn about bookstore operation and serve their own community. Decorative works of the Book Store are now in progress and soft opening is expected in late January next year.

Positive responses have been received for the Campaign since its launch. In addition to raising funds, both Helen and Mei-ting suggested that the Campaign also helps arouse people’s awareness on concerning their community. “When selling the Lucky Bags, a teacher from another district has contacted us, saying that his school wants to organise an animal protection campaign in the community and would like to see if there’s chance of collaboration. I think our Campaign has created opportunities for those who care for the community and concern for animals to come together to work for a better community,” said Helen.  The Campaign has brought out successfully the message of caring for the community, and carried through an important element of the Lingnan Spirit – a readiness to serve.