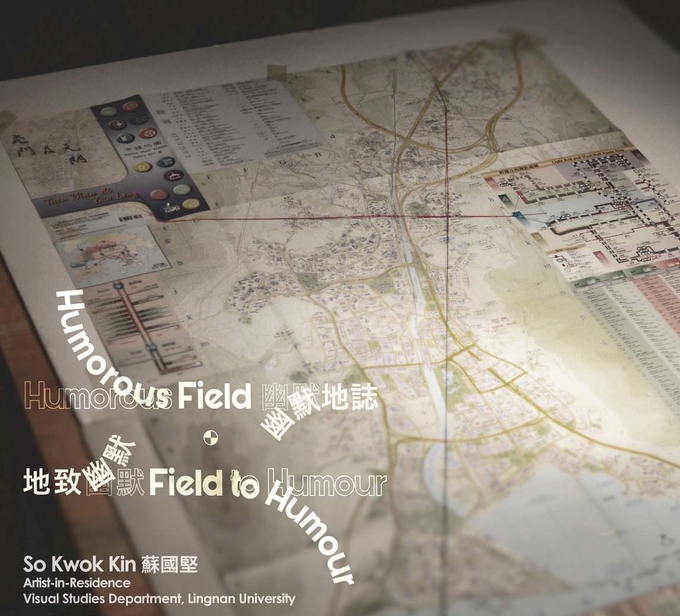 Mr So Kwok Kin, Artist-in-Residence of Lingnan University for the first semester of 2016/17 held an exhibition themed "Humorous Field - Field to Humour" from 8 to 31 December at the Leung Fong Oi Wan Art Gallery, with the attempt to illustrate that "humour" can be manifested in any urban space.

Mr So is a registered architect in Hong Kong.  He has a background in both architecture and the fine arts, which enables him to combine the language of design with an aesthetics typical of fine art, both in teaching studio courses and in his own art practice.  His recent work examines the aesthetics of humour in local urban spaces and the creation of site-specific humour situations and installations.

Mr So set the university campus as the centre of this project, through which a vertical line and a horizontal line were drawn on the map: the vertical line starts from Nai Wai in the north and passes through the Lingnan campus, San Hui Market and Tuen Mun River to the coastline in the south; the horizontal line links up the ridges from the east to the west and passes through locations including Fu Tei and Siu Hang Tsuen.  Walked along the lines and wandered around the neighbouring communities, Mr So, a registered architect in Hong Kong, discovered a lot of unexpected spatial humour with his expertise in architectural concepts blended with artistic elements.

By using his observation and imagination, Mr So modified ordinary objects and recorded the process by taking photos, producing models, shooting videos or even producing animations to share his “spatial humour” he discovered.

Launched in 2006, the Artists-in-Residence Programme of the Department of Visual Studies brings two visiting artists to Lingnan University every year.  During their residency, the artists teach one limited enrollment Studio Practice course in their particular areas of expertise.  They also pursue their own artistic projects, typically mounting an exhibition showing work produced at Lingnan at the end of their residency.

Visit by Lingnan Foundation Board of Trustees