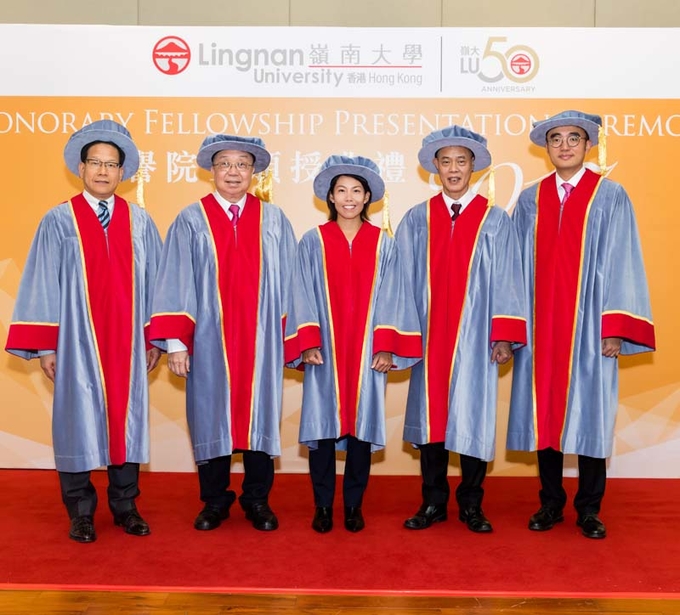 The Honorary Fellowship Presentation Ceremony 2017 was held on 12 October, during which the University conferred honorary fellowships upon five distinguished individuals in recognition of their outstanding achievements in their respective professions and valuable contributions to the well-being of society.

Mr Ho Sai-yiu delivered an address at the Ceremony on behalf of the honorary fellows and expressed their gratitude to the University for conferring upon them the honour.  Mr Ho pointed out that since its founding in 1888 in Guangzhou, Lingnan University has been educating the kind of talented young people who can help modernise the country, guided by the motto “Education for Service”.  “The essence of liberal arts education is to encourage students to ‘acquire broad-based knowledge and live in a noble and graceful manner’, qualities which enable students to better adapt to changing trends and developments in today’s society,” said Mr Ho.

Mr Ho encouraged Lingnan students to appreciate what they have and fulfill the expectations of their teachers, putting what they have learned to good use, turning knowledge into action.  “First of all, you should learn to distinguish right from wrong, study hard, and never give up,” he said.

The ceremony, presided over by Mr Simon Ip Shing-hing, Deputy Chairman of the University Council, was held at Chan Tak Tai Auditorium on the campus of Lingnan University.  Please click here to read the citations of the honorary fellows.

Lingnan University becomes one of the top 100 Asian universities