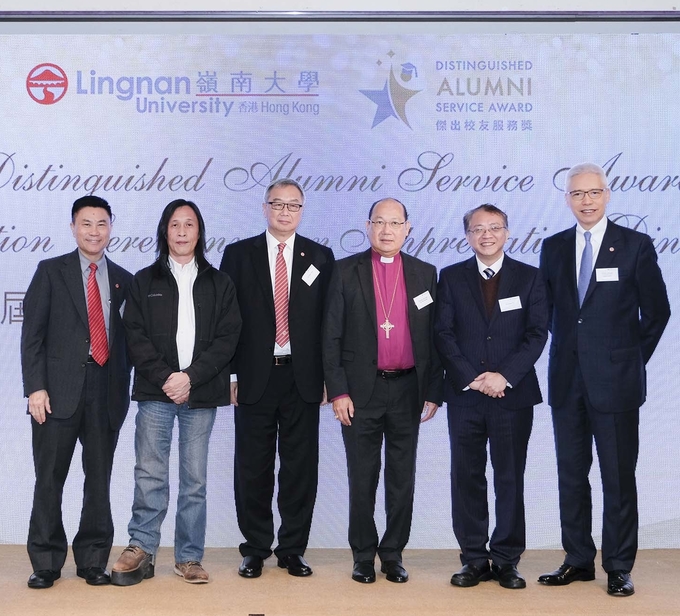 Award recipients of the first Distinguished Alumni Service Award include The Most Reverend Dr Paul KWONG, Archbishop of Hong Kong Anglican Church who has outstanding achievements in religious, community and educational fields; Mr Allister NG Kwai-Hang, preacher and Director of non-profit making organisations who has been devoted to Christian ministry work and community service; Mr Henry SAM Chien-Man, founder of RCC (Contracting) Limited who has actively participated in Lingnan’s fundraising activities for many years and donated generously to support Lingnan’s development; and Dr Herman YAU Lai-To, a veteran film director committed to nurturing the next generation through film, culture and art education.

Mr Rex AUYEUNG Pak-Kuen, Council Chairman of Lingnan University mentioned in his welcome remarks that Lingnan University “has firmly embraced its motto ‘Education for Service’, nurturing generations of students who have proceeded to numerous careers and professions with commitment to serving the society,” adding that it was not an easy task for the Selection Committee to select the best candidates from a pool of quality nominees.

“The awardees possess a common DNA of Lingnanians: the Lingnan Spirit of passion, loyalty, perseverance and serving, which we try to impart to our students,” he remarks.

President Leonard K CHENG remarked in his address that he was very impressed by the great support of the distinguished alumni given to the campaigns and initiatives of the University and their commitment in serving the society. “The four award recipients we honour today will not only serve as role models for all Lingnanians but also help foster a sense of pride among the Lingnan community.”

The Appreciation Dinner was also held at the same occasion in honour of the donors and supporters of the University. President Cheng expressed his gratitude to them: “without their generous and unfailing support, many of our ideas and plans could not come true.”

Exhibition of artworks by SZTO Wai, former principal and father of Lingnan’s logo

Prof Simon LI’s keynote talk at Hospital Authority: errors should not be viewed as faults of men