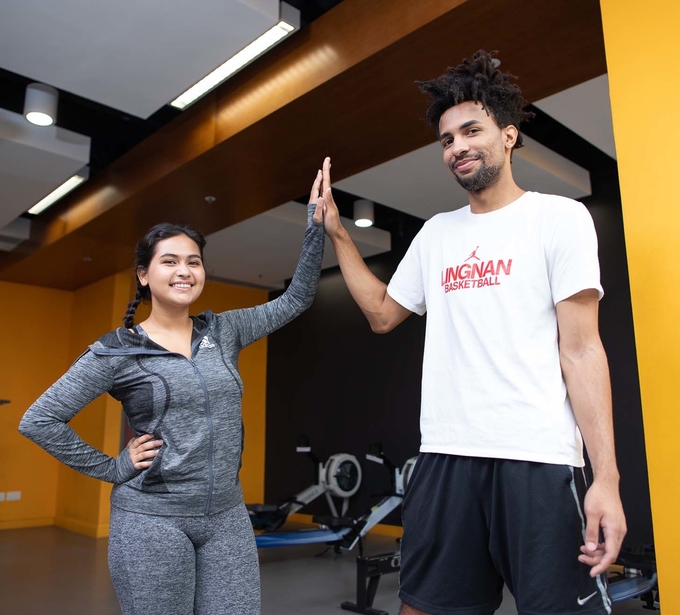 With his athletic 6-foot-4-inch frame, Felix Avena certainly stands out from the crowd on the Lingnan campus. Driven by ambitions of a career in Asia and his positive view of future trade relations between China and his home country, the Brazilian undergraduate has flown half way round the globe to take a bachelor’s degree in finance in Hong Kong.

“There is a trade agreement between Brazil and China and a lot of opportunities in Hong Kong, so I thought it would be good for me to come here,” he says.

Avena is one of the overseas students at Lingnan, thanks to a non-local scholarship granted by the University. Now in his second year, he is more than grateful for the financial support which helps to cover tuition fees and living expenses throughout his degree.

With his eye on a career in Greater China, he also felt it was important to learn Mandarin and, therefore, was glad to know suitable courses were available at Lingnan. He has made progress in mastering the basics and can now ask for directions or order in a restaurant without too much trouble.

Though drawn by the economic prosperity of Greater China, Avena admits that the opportunity to play basketball at Lingnan was definitely another attraction. His passion for the sport began at a very young age, not surprising when you consider that his father was a professional basketball player for close to two decades and he has two cousins who play basketball and volleyball to a high standard.

Before arriving in Asia, Avena went to the US, where he studied at Westwind Prep Academy and Murray State College. For the latter, he starred on the basketball court in the NJCAA division.

At Lingnan, he now turns out regularly for Hostel C and is co-captain of the university team. In matches, he shows a full array of skills and a real determination to win. In practice sessions, though, where things are more relaxed, he enjoys the laughter and the enthusiasm of his local teammates to run drills, learn new moves and keep improving.

“My teammates have expectations of me because I came here from America,” he says. “Next year, we hope to welcome more players and take the training to the next level.”

Making friends in a new city is always challenging, but Avena found that being part of the team made it easier to fit in quickly.

“Most people here are a little bit shy, so it did take a while to make friends,” he says. “But playing basketball helped a lot. The internal league, the President’s Cup, in which I play for the hostel team gave me the chance to talk to more people, including those who came to watch, and it was a great way for me to get along with local students.”

Thinking back to when he first arrived in the US, he remembered being shy around strangers because his English wasn’t fluent. He soon realised, though, that the best thing was get out his comfort zone and just speak more – and he now encourages fellow Lingnan students to do the same.

“If you are not a native speaker and you say something wrong, that’s okay. People will know it’s not your first language and that you are trying hard. When I first moved to America, the only thing I could say was my name is Felix.”

This is his first time in Asia, but Avena has lost no time in discovering new interests and activities. In particular, he is fascinated by the spectacular skyscrapers and, in sharp contrast, also loves the picturesque yet easily reachable hiking trails.

“Before coming to Hong Kong, I didn’t know there were places like this,” he says. He is now curious to explore the rest of the city, including the neighbourhood around Lingnan University and the outlying islands.

He believes one of the tricks to settling in a new city is to stay open-minded. It also helps if you are not too picky about food and are ready to try some of the local delicacies like Hong Kong-style milk tea. Indeed, sipping that energising brew at a cha chaan teng has become a favourite part of his daily routine.

To get the most out of campus life, Avena makes good use of the school facilities and can often be seen in the gymnasium and the pool as part of his strict physical training regime.

While keen to learn about Asian culture, he also takes any opportunity to tell people about his home country. Therefore, he was excited to attend the International Day held on campus last year, where exchange students set up exhibitions of their own culture, and he is thinking about taking one of the booths next time around.

“It would be interesting; I am sure most people here have never tried Brazilian food. For example, we have a thing called ‘churrasco’ which is a kind of barbecue. It’s delicious.”

Despite so much going on, Avena is already making plans for life after university.

“I will try to get a job here after graduation as I plan to spend a good six to seven years to gain experience before going somewhere else,” Avena says. “But I am also open to staying longer.”