International Conference on “Border-Crossing: the Chinese and Foreign, the Ancient and the Modern” 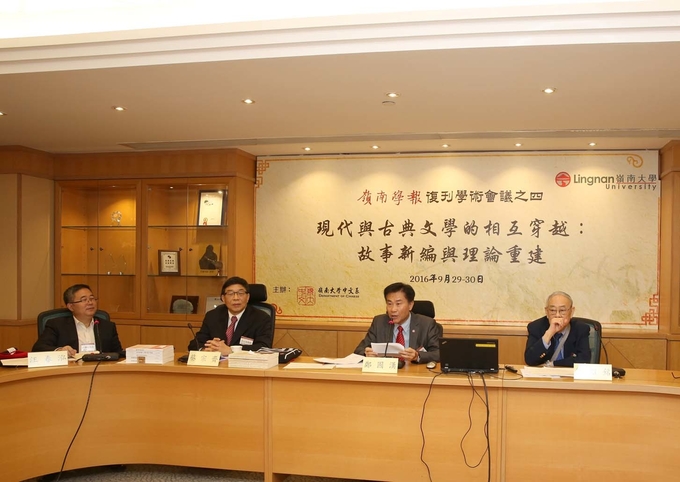 “Border-Crossing in Modern and Classical Chinese Literature: Stories Retold and Theories Reconstructed,” an international conference hosted by the Department of Chinese of Lingnan University, was held on 29 and 30 September.  Officiating guests included President Leonard Cheng, Prof Cai Zongqi, Chairman of the editorial committee of Lingnan Journal, and Prof Joseph Lau Shiu-ming, Professor Emeritus of the Department of Chinese.

In his welcoming address, President Cheng shared with the participants his vision of liberal arts education for Lingnan and applauded the endeavours by conference participants to reflect on the past, look forward to the future, and blaze a new trail in Chinese humanities research.

Prof Cai gave a brief review of the history of the Lingnan Journal.  Founded in 1929, it was a renowned venue of publication for eminent 20th century scholars including Chen Yinko, Wu Mi, Yang Shuda, Wang Li, and Rong Geng.  It ceased publication in 1952 when Lingnan University at Guangzhou was closed.  After painstaking efforts for three years, Lingnan Journal was relaunched in 2014 and as of now six issues featuring works of top-notched scholars have already been published.  The Journal has become a sister journal with the Journal of Chinese Literature and Culture (JCLC), an English-language journal co-founded by Lingnan Journal and Peking University and published by Duke University Press.  Prof Cai expressed the hope that the Journal will help to open up new intellectual horizons and stressed the importance of serious scholarly pursuit. He also expressed his gratitude to the great contributions made by Prof Lau to the field of modern Chinese literary studies at large.

In his speech, Prof Lau talked about the scholarly issue of canonicity, using the changed perceptions and assessments of Eileen Chow’s works as a prime example.  The rise of Chow from a writer of the Mandarin Ducks and Butterfly School to a major canonical writer attests to the continual process of canon formation and re-formation, Prof Lau observed.