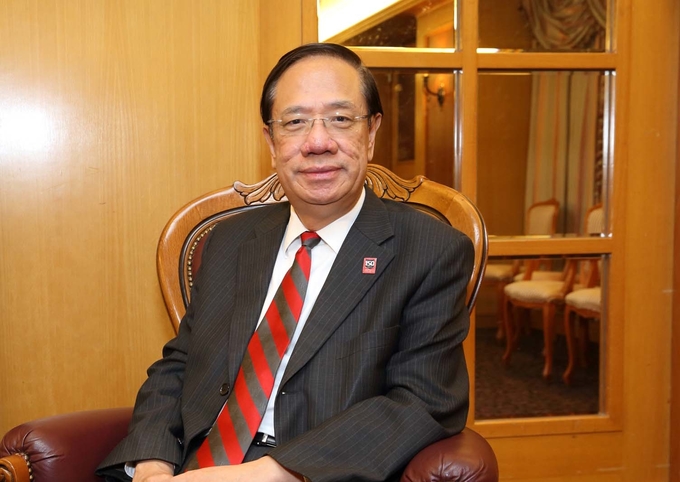 Prof Albert Ip, former Council member and Chairman of the Institutional Advancement Committee of the University, has long had a passion for spreading knowledge and working with people, first as an encyclopaedia salesman in the US when he entered the workforce in 1977 and, more recently, as an academic, career advisor and fund raiser. In between, he spent more than 30 years in banking, both in the US and Hong Kong, with firms such as Citibank, Bank of America Merrill Lynch, First National Bank of Chicago and Wells Fargo.

Prof Ip is currently CEO of Langham Hospitality Investments, a listed company, and also sits on the boards of six other listed companies, including Hopewell Holdings, Hopewell Highway Infrastructure, Eagle Asset, Power Assets, Lifestyle (Sogo), TOM Group and, until it was privatised in August 2016, New World China Land. In addition, he devotes himself to working with students, mostly at Lingnan University and City University of Hong Kong, helping to set their career goals and finding placements for them among his vast network of business contacts. He is also dedicated to the proposition that a liberal arts education is no impediment to a successful career.

The growing value of a liberal arts education

Many in Hong Kong still believe that a liberal arts degree does not adequately prepare graduates for a career in the world of business. Prof Ip does not share that view.

As evidence, he points to all the past and present Fortune 1000 CEOs in the US who have liberal arts degrees, including Michael Dell of Dell Inc., Jamie Dimon of JPMorgan Chase, Michael Eisner of the Walt Disney Company and Carly Fiorina, former head of Hewlett-Packard and contender for the 2016 Republican presidential nomination.

Today, Prof Ip says, the demand for graduates of liberal arts programmes is stronger than ever in the US, even in the tech world. “Between 2010 and 2013, the share of liberal arts graduates joining the tech workforce grew 10% higher than engineering and computer science graduates. This is partly because tech companies want people with broad development skills, who can think outside the box, which a liberal arts education at Lingnan University is preparing students for.”

And the demand for liberal arts graduates will only continue to grow. “If the 20th century was the era of specialisation, the 21st century is that of generalisation,” says Prof Ip. “A goal of education used to be the absorption of facts. Now, thanks to the internet, facts are at one’s fingertips. The ability to analyse, ask questions from a different angle and to think critically are more important. The specialists will always be in demand, but it is the generalists who will lead.”

He believes that Lingnan can play a greater role in promoting liberal arts education. Having been with the University over the last nine years, he sees the advantages it offers, particularly its focus on service-learning which combines formal academic studies with meaningful service to the community.

“I tell students that once you go into the real world, you have to have a caring heart,” Prof Ip says. “Companies today are talking more and more about corporate social responsibility, and a liberal arts education at Lingnan will help them prepare for this new environment. In fact, starting in 2017 listed companies in Hong Kong will be required to comply with ESG (Environment & Social Governance) standards.

“Our students at Lingnan compete well with other universities in Hong Kong,” he adds. “Companies choose students not so much based on the universities they come from, but rather on their passion, broad based knowledge, attitude, and their critical thinking abilities.” These traits, he believes, are firmly instilled in Lingnan students.

As an example, he points to the fact that 35% of recent Lingnan accounting graduates have found jobs at the Big Four accounting firms. He has also succeeded in helping students secure highly coveted management trainee jobs at New World Development, Bank of East Asia and Wing Lung Bank, as well as positions at Wharf China, Marco Polo, Hopewell, Dairy Farm, Citibank and Dah Sing Bank. Professor Ip added that some of these graduates had studied Social Sciences, not Business Administration.

The Human Resources Head of a conglomerate who has hired four Lingnan graduates recently commented: “We are impressed by the outstanding performance of your nominated students during the selection process of our Group Management Trainee programme.”

The rewards of helping

Although Lingnan puts a great deal of effort into preparing students for a career, Prof Ip believes that the university needs to build up its brand and consider the feasibility of offering joint degrees with leading overseas institutions, just as the National University of Singapore has done with Yale University in establishing a liberal arts university in Singapore.

“President Leonard has done a good job branding Lingnan University,” says Prof Ip. “But more can and will be done to increase our recognition as an excellent teaching university, particularly for satisfying the talent needs of companies in Hong Kong, both local and global.”

Prof Ip also played a prominent role helping to raise funds for the university as a previous Council Member and Chairman of the Institutional Advancement Committee. The funds raised support students through scholarships, exchanges and internships. However, he feels his contributions at the Career Services Team of the Student Services Centre are equally important.

As an advisor, he conducts mock interviews and gives them advice on their career direction. “I tell students they must be willing to take some risks, to be more proactive and start their career planning early on, ideally at the end of their second year. I also encourage them to build up their practical knowledge in addition to academics so they can understand the realities of the business world. Lastly, and equally important, to build up their networks with companies and alumnae.”

Prof Ip also said he will continue to work with students to provide career advice and help connect them to his network, something he has done at Lingnan University since 2008. “When I am able to successfully place a student, see an improvement in his or her career prospects, or receive a thank-you card, this is the best encouragement for me and gives me the motivation to keep spending my weekends with them.”