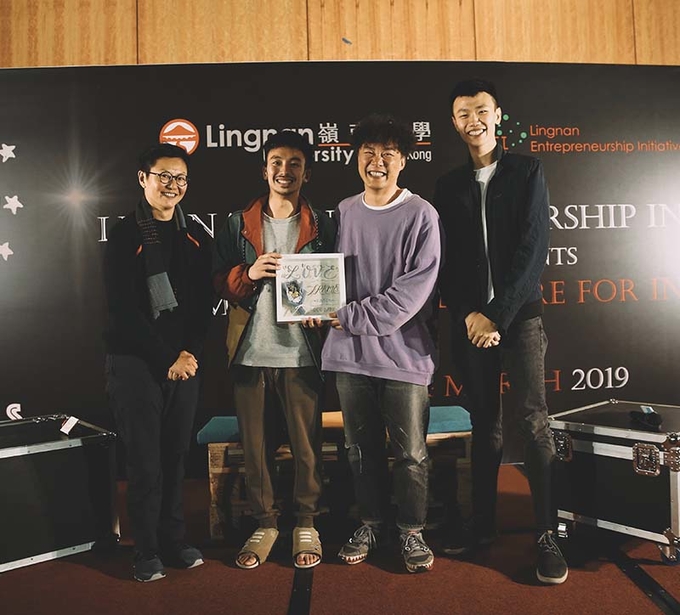 Lingnan Entrepreneurship Initiative (LEI) organised the A Musician’s Venture for Inspiration – Music Documentary Screening L.O.V.E. in F.R.A.M.E.S. on 14 March 2019, in which Cantopop singer Eason CHAN shared his work and music journey of the past 8 years. Attracted an audience of over 400 staff and students, the event aims to showcase the power of entrepreneurial spirit in the arts, culture and creative industry and nurture students’ entrepreneurial mindset.

The music documentary L.O.V.E. in F.R.A.M.E.S., directed by CHEUNG Kit-Bong, one of the backing vocalists of the DUO band, captures the behind-the-scenes of the DUO Eason Chan Concert in 2010-2012, and the making of the album L.O.V.E. in studios in England, Guangzhou and Hong Kong for six years.

After the screening, Prof Denise TANG Tse-Shang of the Department of Cultural Studies of Lingnan University and Dickson CHENG, a student majoring in Psychology, hosted a dialogue session with Chan. Chan recalled the inspiring stories behind the production of the documentary and the album, and used his music passion to encourage young musicians to pursue their dream. He explained how he and the Band started only with a common vision and worked through limited resources and countless uncertainties to finally make the impossible possible. Common features between musicians and entrepreneurs were also discussed in the dialogue. They pointed out that both influential musicians and arts workers are entrepreneurial standouts. Chan further concluded that the prerequisites that made the 8-year long documentary production possible are teamwork spirit, determination, persistence and a venturous heart.

He encouraged Lingnanians to “break through obstacles and make it happen”, and expand personal network unceasingly.  The experience of Chan and the DUO band demonstrates a great entrepreneurial spirit on their journey of new creation. Their venture has motivated and inspired young musicians as well as Lingnan students to have active attitudes and positive values in their life, study and future career. This aligns with the entrepreneurship education of Lingnan University that nurtures students with creative confidence and empowers them to pursue the seemingly impossible with passion and action.

Lingnan University launched the LEI in 2018. Through workshops and activities, the LEI endeavours to cultivate innovative mindset and entrepreneurial spirit among students, and collaborate with groups and organisations in different areas to develop technological products and services that contribute to the society at large.