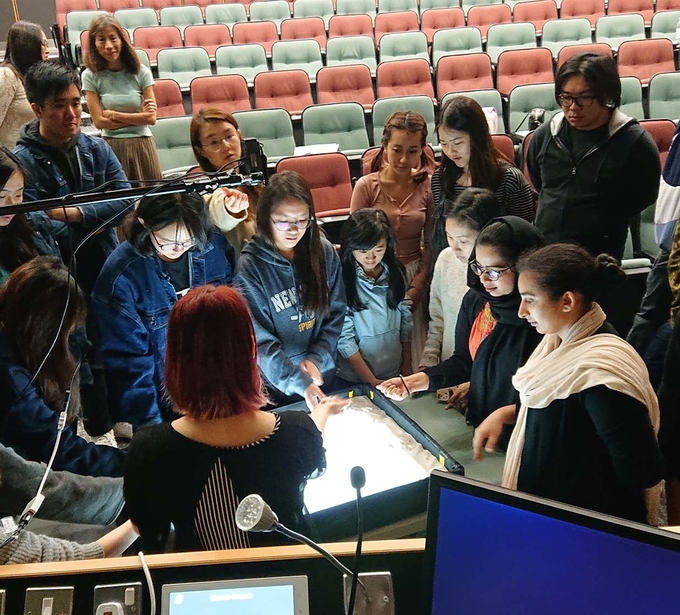 For the fifth year in a row, the Lingnan University Equal Opportunities Committee (LUEOC) organised the annual Equal Opportunities Awareness Campaign 2019 on campus from 19 to 27 March with a series of promotion booths, talks, workshops, sharing and career consultation to raise the awareness of equality and respect of diversity.

From themes of “Understanding Diversity”, “Appreciating Diversity”, “Respect for Diversity”, “Breaking Stereotype” to this year’s “Inclusiveness – Embrace our difference”, the Campaign in 2019 promotes a step further to embrace difference between individuals for creating an inclusive environment at Lingnan.

In his opening remarks at the Kick-off Ceremony on 19 March, Acting President Joshua MOK Ka-Ho pointed out that inclusiveness is extremely important not only for university but also a global city like Hong Kong, “Two things are essential to being a global city, one is the international dimension and the other is inclusiveness. Lingnan University is a liberal arts university that strongly believes in creating a conducive environment for learning. At Lingnan, we hope students can embrace diversity and also accept individual difference.”

Prof Mok was of the view that a modern society needs better inclusion as each and every one of us is vital to the world and it is the personal distinctiveness that makes life vivid.

Prof Lisa LEUNG Yuk-Ming, Chairperson of LUEOC said in her remarks: “Since 2014, the Committee puts in policies and guidelines to demonstrate Lingnan University as a liberal arts university that advocates equal opportunities, such as appreciating and respecting differences, and safeguard equal opportunities of all.” She hoped the community can genuinely show respect for different cultures, ethnicities, races, abilities and gender not just in words but in action.

The one-week event featured promotion booths and talks for participants to learn more about people with disabilities like hearing impairment, visual impairment and dyslexia. Students can taste the difficulties faced by the deaf by joining the experiential workshop. Apart from cultivating an understanding culture, the Campaign arranged workshops for staff and trainings for student ambassadors to support those with special educational needs, and one-to-one career consultation for SEN students.