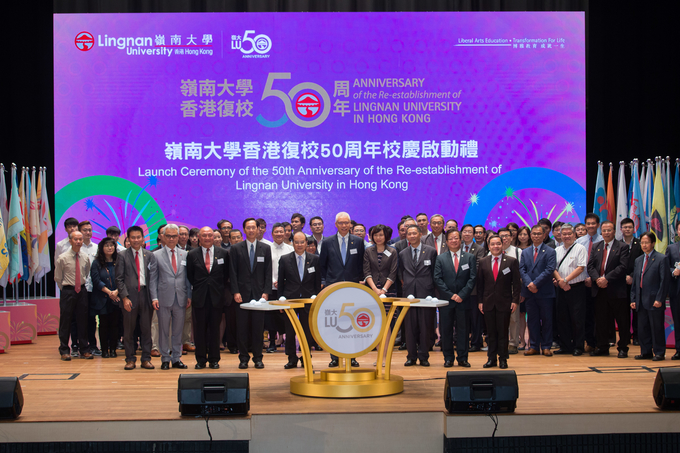 The Launch Ceremony of the 50th Anniversary of the Re-establishment of Lingnan University in Hong Kong was held on 19 September at Chan Tak Tai Auditorium of the University campus.  About 700 staff, students, alumni and friends of the University gathered together to unveil the curtain of celebration activities in the coming year.

Lingnan University is the liberal arts university in Hong Kong and has the longest established tradition among the local institutions of higher education.  The University’s history can be dated back to 1888, when its forerunner, the Christian College in China, was founded in Guangzhou, and to 1967, when the institution, as Lingnan College, was re-established in Hong Kong.  In 1999 it was renamed Lingnan University and in 2015, it was named as one of the “Top 10 Liberal Arts College in Asia” by Forbes.

The University is honoured to have invited Mr Matthew Cheung Kin-chung, Chief Secretary for Administration of the Government of the HKSAR as the Guest-of-Honour of the Ceremony.  Mr Cheung said at the ceremony that Lingnan is a shining example of the virtues of liberal arts in education.  As the only publicly-funded liberal arts university in Hong Kong, it has created a unique brand of higher education characterised by close staff-student relationship, rich residential campus life, global learning opportunities and active community service.  He trusts that Lingnan will continue to nurture generations of Lingnanians with a fair and critical mind and a caring heart to contribute to the community.

“I am honoured to witness and take pride in our accomplishments in nurturing talents possessing professional knowledge, capacity for critical inquiry, care and respect for nature and humanity,” said Mr Auyeung.

In his thank you remarks, Prof Leonard K Cheng, President of Lingnan University said that in just 50 years, Lingnan has developed from a small and modest college with 137 students into a reputable, internationally-recognized university of excellence with over 3000 students, committed to the pursuit of high-quality teaching, research and service to the community.

“Over the past five decades, Lingnan has made a lot of outstanding accomplishments.  One of the latest examples is that in 2015, Lingnan was named by Forbes as a “Top 10 Liberal Arts College in Asia”.  In the most recent QS report, it was pointed out that Lingnan “performed among the top 57% in the QS World University Rankings”, and “considering there are approximately 26,000 universities globally, this makes Lingnan University one of the top 2.1% universities in the world,” said President Cheng.

“Our 50th anniversary is not only a significant milestone, but also an opportunity for us to reflect on our success and challenges, and show our gratitude to all the people who have made outstanding contribution to the University over the years,” he said.

On reaching this important milestone, Lingnan University will organise a series of celebration events starting from September this year which will last for a year.  To introduce to the media and the public the year-long celebration events, a media gathering was organised on 13 September when a sealing ceremony of a time capsule enclosing a collection of materials and items related to the current development of Lingnan and the Anniversary celebration was also held.

Prof Joshua Mok Ka-ho, Vice-President and Chairman of the Organising Committee of the 50th Anniversary of the Re-establishment of Lingnan University in Hong Kong introduced the key celebration events in the coming year.  They include the launch conference of the Alliance for Asian Liberal Arts Universities on 20 to 21 November, Principal Forum in the Greater China Region on 6 December, launch of the 50th Anniversary publication “50 Years of Lingnan Spirit” in January 2018, and the Lingnan University 50th anniversary in Hong Kong Celebration Banquet on 20 January 2018.

Please click here for more details of the celebration activities.