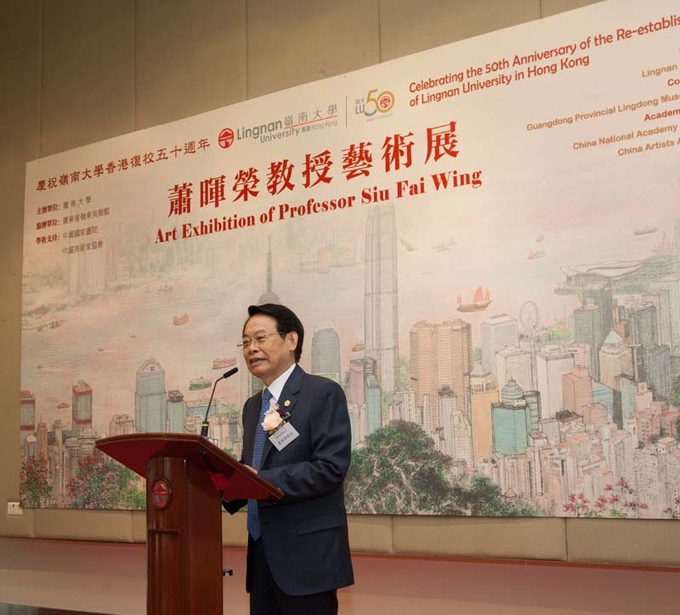 The opening ceremony of the “Art Exhibition of Professor Siu Fai Wing” organised by Lingnan University was held on 22 September.  The exhibition is one of the celebration events for the 50th Anniversary of Lingnan University’s re-establishment in Hong Kong, with the aim to showcase the charm of Chinese art and promote Chinese culture.

Prof Siu Fai Wing is renowned as one of the most influential artists in contemporary China and a leading figure in the art circle of Hong Kong.  He has been industrious and persistent in his pursuit of art for decades, something which explains his outstanding achievements in various fields of fine art, including Chinese painting, calligraphy, and sculpture.  His works were selected for the National Exhibition of Fine Arts for seven consecutive years and won many awards.  Since Year 2000, his artworks have been shown in more than 50 large-scale solo exhibitions in major cities around the world and have received glowing reviews.  Prof Siu is the only Chinese painter who has an asteroid named after him.  His works highlight his seasoned creative skills, profound apperception of classic culture, and accurate grasp of the contemporary spirit. An amalgam of traditions and modernity, his creations form a unique, unprecedented artistic style which differs from that of most contemporary artists.

In recognition of his distinguished achievements, Prof Siu has been honoured with a myriad of awards in recent years.  In 2013, he participated in the “First International Art Biennale - the Shanghai Cooperation Organization” and won the gold medal.  He was then selected as the “Top Hundred Global Outstanding Chinese List” and won the “Global Outstanding Chinese Award” in 2014.  In 2017, he received an award with honour as one of the 20 most outstanding Hong Kongese with significant influence during the 20 years of Hong Kong’s return to Motherland.

The two-week “Art Exhibition of Professor Siu Fai Wing” is being held from 23 September to 6 October at Leung Fong Oi Wan Art Gallery and Fong Sum Wood Library at the Lingnan campus. It showcases over 270 art pieces of Prof Siu including paintings, calligraphies and sculptures.  The exhibition is organised by Lingnan University and co-organised by Guangdong Provincial Lingdong Museum of Art, and receives academic support from China National Academy of Painting and China Artists Association.

In commemoration of the University’s golden jubilee, Prof Siu presented a collection of art pieces to Lingnan, including a calligraphy piece on our motto “Education for Service” written in Niaochong Zhuanshu.